Lincoln's Second Inaugural, The Scorpion and the Frog 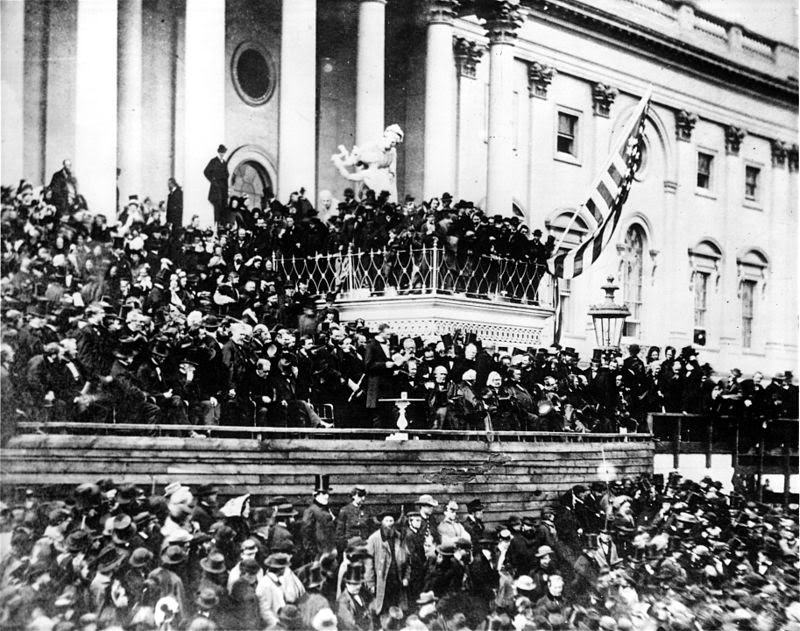 On March 4, 1865, after taking the Presidential oath of office for the second time, Abraham Lincoln addressed the mass of Americans that had gathered for the occasion.  He used just 701 words to lay out a vision of what could be, but to also suggest that America deserved the mess it was in.

Lincoln knew the end of the war was near and knew that the Union was likely to be victorious.  He rejected a victory lap and instead reminded those listening (and those reading in coming days) that everyone had been wrong about the war four years earlier.  Everyone thought it would be an easy victory.  Everyone thought that it would go there way.  No one expected to be in this position four years hence.

Lincoln made heavy allusion to the Bible, wrestling with the question of whether the war was a divine punishment for the sin of slavery and if it is, accepts whatever duration of punishment that Providence seeks to levy upon the American people.

But, he closes with hope.  "With malice toward none, with charity for all," are probably the most famous works of this address and truthfully, Lincoln was more hopeful than history would bear out.  Part of this was that Lincoln would not be there to see the end, given over to the angels by a zealot.  But the spirit of reconciliation persists as the spirit of hope that we can find the better angels of our nature, that we can find our best possible selves and that when new leadership arises, they can be competent and rise to the occasion.  History shows what happens when the wrong man is placed at the reins at a critical juncture.  Sometimes this is because of good intentions and a lack of foresight.  But sometimes, it can work.  Let us hope that the right choice is made.
-------------------------------------------
There really isn't a whole lot to say about yesterday's game, but one thing struck me.  The last 40 seconds, as Maryland realized that the clock had ticked down under 40 and the play clock had not started, Michigan Stadium was silent.  Not the stunned silence of a last minute comeback.  Not the angry silence of an all-time upset.  But the knowing silence of a half-empty venue knowing that this day was as much a funeral as it was a football game.  It would have been eerie, except it was almost expected, as much as something like this can be.

We came to say goodbye to some seniors, and to likely say goodbye to Brady Hoke, in the last weeks of the job he would have walked to Ann Arbor from San Diego to take.  There has to be something to be said for getting your dream job and looking like you actually are going to be able to do something with it, only to see it slip away, like sand through ones fingers.

The modern fable of The Scorpion and the Frog can be briefly summarized as this:


A scorpion asks a frog to carry him over a river. The frog is afraid of being stung during the trip, but the scorpion argues that if it stung the frog, both would sink and the scorpion would drown. The frog agrees and begins carrying the scorpion, but midway across the river the scorpion does indeed sting the frog, dooming them both. When asked why, the scorpion points out that this is its nature.

For us to expect yesterday to be anything different was to be vested in hope rather than reality.  A Brady Hoke coached team could not simply suddenly morph into a competent, detail oriented unit off an open date just because Brady's job might be on the line.  Because, wouldn't logic serve that if they were capable of it, wouldn't they have done it sooner?  That is the nature of this team, and that is the nature of this staff.  They are amazingly consistent in their inconsistency.  It is the maddening hallmark of the Hoke era, which will draw to a close more than likely after a severe crushing at the hands of the rival Buckeyes for their 12th win in the series this millennium.  A new era will rise in its place, sooner rather than later.  We will be sold hope, because we've oversold tradition and heritage.  We will be told that the new guy's got a plan, and we'll believe it because we want to believe.  We will wait until September to make our judgments, failing to remember that the last time we were here, the first September taught us all the wrong lessons.  We will do that, because it is our nature.

Email ThisBlogThis!Share to TwitterShare to FacebookShare to Pinterest
Labels: another column about an inaugural address, column, funerals, lincoln, silences, wakes