Greetings once again, small creatures of the University of Michigan! HOCKEYBEAR can only assume that's what the acronym scUM stands for -- I probably should have asked someone at Michigan State or Ohio State before I destroyed their campuses.

Anyway, the day of reckoning you've feared since the CCHA schedule was released is at hand! The mighty HOCKEYBEAR, leading my indomitable team of Alaska Nanooks, is heading to Yost Ice Arena for the ultimate conference showdown. And I'm going to be making a few changes when I get there.

Before getting into those changes, I must tell you an AMAZING HOCKEYBEAR FACT! Did you know I can change my size at will? It's true! You can see it my famous intro videos. Here, I'm large enough to dwarf an icebreaker: 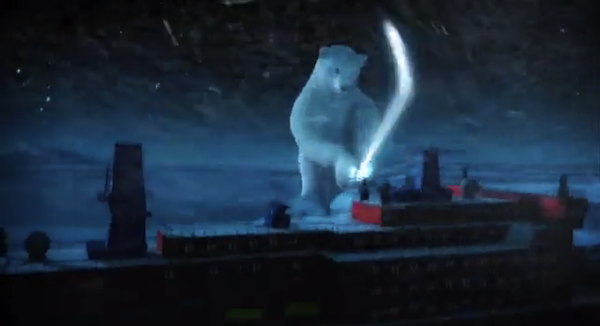 But one cut later, I'm small enough to fit in an F-16 cockpit. A little bit later, I'm back to normal space polar bear size, skating comfortably on the Carlson Center ice: 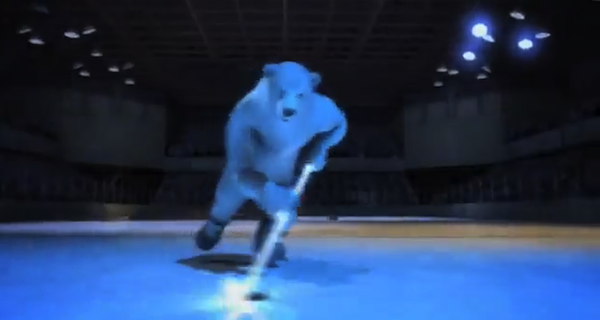 If necessary, HOCKEYBEAR can also shrink in size as well. You may think that, in this still from my 2011-12 season video, I'm standing on a giant hockey puck: 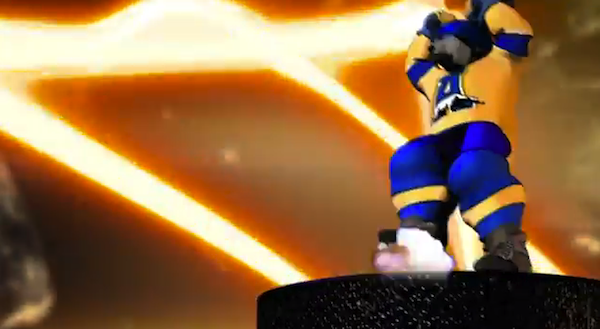 That's not true. I miniaturized myself and was standing on top of a regulation three-inch diameter puck. Saved UAF thousands in set construction.

My ability to change size extends to objects I'm touching when I expand or contract. Because you scUM have been so respectful to HOCKEYBEAR over the past several years, I will use my powers less to destroy your athletic campus and more to renovate it. Don't worry, destruction fans: there will be lots of collateral damage. 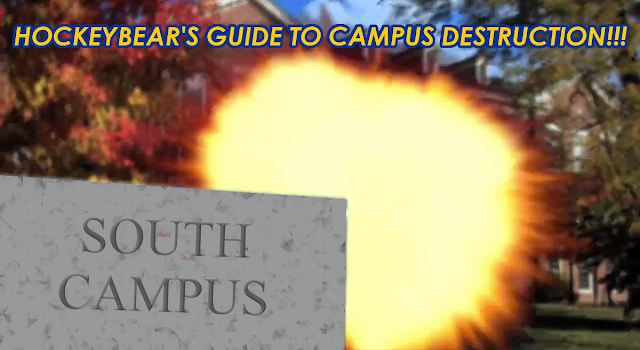 Crimes:
HOCKEYBEAR is pleased that you have recently renovated Yost Ice Arena into a superior venue for playing and watching hockey. However, I am ENRAGED that its capacity was maintained at 6% of the capacity of the venue where you watch the vastly inferior sport of foot-ball! I am somewhat forgiving because you had scheduled for a professional hockey game to be played in your unnecessarily large foot-ball stadium (insofar as any game involving the Toronto Maple Leafs can be said to involve professionals). It is not your fault that the NHL is run by gluttonous morons who canceled the game because they are dumb and stupid.

Therefore, what HOCKEYBEAR will do first is shrink your foot-ball stadium down to the size of a nut from an Aesculus tree. Then, using my mighty strength, I will relocate Yost Arena to the present site of your foot-ball field and, using my embiggening powers, I will increase Yost's size by 90% so that it completely covers the field. The seating capacity of the new Yost Foot-Ball Stadium will be 12,610. It seems like that number is reasonably close to the maximum number of humans who should be interested in watching a foot-ball game.

Once Yost is placed on its new foundation, HOCKEYBEAR would return Michigan Stadium to its normal size and place it around the ice rink. However, it is HOCKEYBEAR's understanding that the seats at your ex-foot-ball stadium provide insufficient space for the butts of humans. HOCKEYBEAR finds this hard to believe, as you humans are so small, but apparently it is true. Thus, I will use my powers to make the new Michigan Stadium 50% larger to make room for all human butts, no matter how "thick" they may be. HOCKEYBEAR knows this is only a temporary solution; Dave Brandon will just renumber the benches after I leave because he is more comfortable with the current, inadequate, size. I will deal with Mr. Brandon some other time.

Relocating the enlarged Michigan Stadium will result in the crushing of many neighboring buildings, including Schembechler Hall and the Ross Academic Center. But those buildings are named after a foot-ball coach and a guy who owns a foot-ball team, so they must not be very important. Furthermore, S. State Street will be permanently blocked, so you will have to tack on an extra hour each way if you have business at Wolverine Tower.

HOCKEYBEAR's renovations to campus will only affect your successful basket-hockey team positively. The Crisler Center will be spared almost entirely: the only change is that HOCKEYBEAR will rechristen it as The Berenson Center. It makes more sense for your basket-hockey arena to be named for a hockey coach than it does for it to be named for a foot-ball coach, because hockey is better than foot-ball. Furthermore, I plan on trapping an unsuspecting Zach Helfand in Yost before expanding it. Because he will be trapped in Yost, he will also increase in size by 90%, making him approximately eleven feet tall. Regardless of how unathletic he may be, he should be an excellent walk-on for the basket-hockey team at that size!

Let's take a look at this new and improved South Campus: 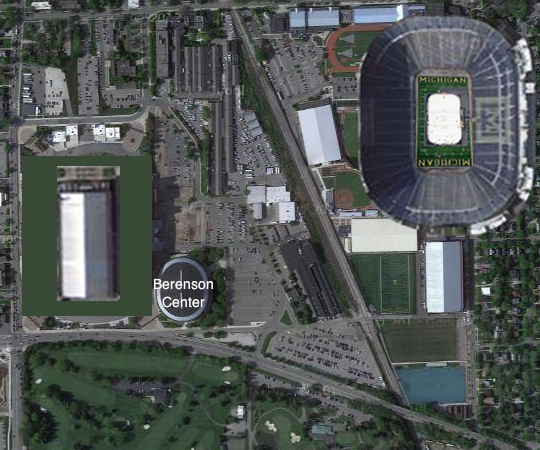 Much better. Of course, this is all dependent on HOCKEYBEAR's Nanooks emerging victorious. If not, RAGE and RUIN and DESTRUCTION for everyone!

Next time: HOCKEYBEAR has concluded my column! You will have to find your own ways to destroy campuses now. Couch fires seem to be a popular campus destruction method among humans in the State of Michigan.

HOCKEYBEAR is a renowned primeval force of destruction known for his appearances in University of Alaska hockey intro videos. When not traveling across the galaxy destroying planets and stars, he lives in Fairbanks and supports his hometown Nanooks. You can follow HOCKEYBEAR's satirical path of destruction and links to cute polar bear videos on Twitter at @AKhockeybear.
Posted by HOCKEYBEAR at 8:36 AM