Greetings once again, small humans of Michigan! I, HOCKEYBEAR, destroyer of planets, planetesimals, continents, nations, states, provinces, universities, colleges, etc., am pleased to announced that I will be writing a guest column at the Hoover Street Rag during college egghockey season!

Sometimes, as I curl up in my den to relax after completing a destructive mission of vital importance, I think back to the fear and trembling I leave in my wake, which leads my to think of Fear and Trembling by Søren Kierkegaard - a great northern soul, just like HOCKEYBEAR - and I ask myself, "Is it all worth it, HOCKEYBEAR? The destruction, the collateral damage, the smoking craters? Wouldn't it be better to just relax in my den, venture out occasionally to eat every part of some Chena River fish and some locally-grown potatoes, and pursue a life of quiet contemplation?"

But eventually I come to my senses and say Fah! to that line of thinking. Destruction can be a force for good. Destruction can inspire, or pump up, a crowd, as viewers of my videos are well aware. Destruction is necessary so that the old can be replaced by the new. Nowhere is this more true as in the modern academy, where new advances in knowledge and in technology make constant rebuilding and renovation necessary. With those thoughts in mind, I present to you:

The naive reader may think that my first column will be about how to destroy the University of Alabama, the first opponent the small humans of Michigan play in egghockey. But that is not the case: HOCKEYBEAR has no interest in your dull egghockey rivalries. The University of Michigan is clearly superior to the University of Alabama in Tuscaloosa because it has a high-level hockey team, and Alabama does not. The finest institution of higher learning in Alabama is Alabama-Huntsville, a school that bravely tries to compete in the highest levels of college hockey despite being located in a sweltering southeastern clime.

Instead, the first campus I shall destroy in my column is one that will hit close to home for many readers from Michigan, but fortunately, an adequate distance away from home itself: North Campus shall feel my wrath! 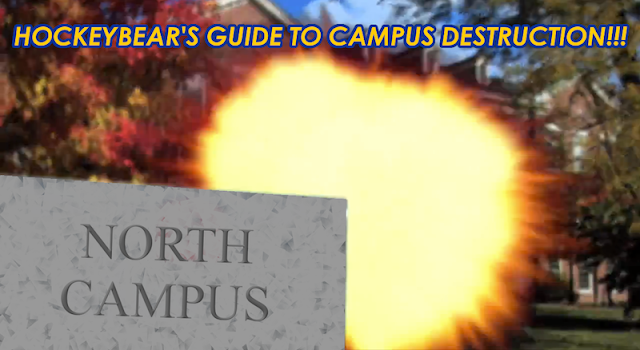 Crimes:
What Needs To Go:
What Gets To Stay:
Did You Know?
HOCKEYBEAR was contracted by Maya Lin to construct the Wave Field but very lightly tapping on the ground with his laser hockey stick, producing the gentle undulations you see today. While on campus to perform the construction, I left a half-eaten Butterfinger bar on a window ledge on the fourth floor of the EECS atrium, which is reportedly still there today. It appears that you guys take the admonition "No one better lay a finger on my Butterfinger" very seriously when it comes from HOCKEYBEAR.

HOCKEYBEAR is a renowned primeval force of destruction known for his appearances in University of Alaska hockey intro videos. When not traveling across the galaxy destroying planets and stars, he lives in Fairbanks and supports his hometown Nanooks. You can follow HOCKEYBEAR's satirical path of destruction and links to cute polar bear videos on Twitter at @AKhockeybear. You can nominate campuses for destruction by messaging HOCKEYBEAR on Twitter too!
Posted by HOCKEYBEAR at 9:00 AM