A Return to Normalcy 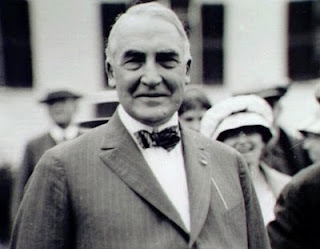 The man above this caption of 29th President Warren G. Harding. During his campaign in 1920, he promised "A return to normalcy" which no one could really pin down what it meant, beyond he wanted to go back to the way things were before the war. ("Status quo ante bellum" is a much better term for that, but we already use that for the Treaty of Ghent, so we had to go in a different direction.)

This past Saturday, for right or wrong, for good or for ill, Michigan returned to normalcy by earning its seventh victory of the year, thus ensuring its first winning season since 2007. A return to normalcy by seeing the defense step up, allowing just two third down conversions in seventeen Purdue attempts. A return to normalcy by forcing five Boilermaker turnovers. A return to normalcy by getting the ball back on the Purdue 49 yard line with a four point lead with just a shade over eight minutes to go and putting together a 9 play, 49 yard touchdown drive that too six minutes and nineteen seconds, converting a big third down by passing to a tight end, and rushing the other eight plays, using the featured back, the quarterback, and the goal line guy. That was classic Lloydball, made better by the fact that it ended with a touchdown and put Purdue on the ropes.

But, perhaps the most normal thing about this game was simply how I felt about it. I was mildly pissed off about a win. We turned the ball over five times. We couldn't decide on a quarterback. We saw Denard show some mild signs of regression in the passing game (the pick six was just terrible decision making, which I am sure will be borne out in the video analysis of the game.) We saw Denard pooch punt for 11 yards from the Purdue 42 in the "Things that must have seemed like a good idea in practice" pile. We saw Tate "surprisingly" pooch punt from the Purdue 39 and drop in the end zone for a touchback and make you wonder what Michigan would be like with a real kicker. Oh, right, we saw Seth Broekhuizen try a 42 yard field goal that missed so badly, it actually didn't even get inside the support for the net that goes up behind the goalposts.

But perhaps in the end, the Harding comparison is a little too apt. Harding was widely reviled for his incompetence, his willingness to let his friends do as they pleased, the general sense of fail that emanated from the White House followed him until his death in 1923. Except, when historians look back, they see that things were not as bad as they once thought. Harding was blamed when things went wrong, but got little to no credit for the things that went right. People saw what they wanted to see and argued their points as they chose a new path to their future. Then again, Harding never got America bowl eligible, so we'll see.
Posted by Craig Barker at 9:53 PM