I want you to hit me as hard as you can

I was sitting with the Michigan Marching Band in Ohio Stadium in 2002 and 2004 when the fans rushed the field after Ohio State's victories. I watched as 100,000 people and 200,000 middle fingers slowly filed past us on their way out, tearing up chunks of sod and throwing it at us. 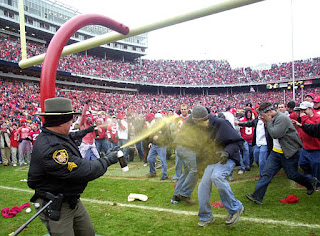 I waited patiently as this happened again in 2004 as the fans chanted "no more Rose Bowl" (right before Iowa beat Wisconsin to send Michigan to the Rose Bowl, since the Big Ten tiebreaker rules are no match for an opportunity to cheer for your team against Michigan).

But this Saturday was different, for reasons besides the obvious players/records/bowl streaks. Where we were once met with scorn, fury, and projectiles, we now faced incredulity and pity.

Why are you here?
Do you guys actually like Rich Rodriguez?
Why haven't you left yet?

Why bother with insults? What peg could you possibly knock us down? "You suck" is a fact; what can we do besides shrug and agree?

This season has dulled the intensity associated both with the feelings I got when we lost a game, and the reactions and behavior from OSU fans in Columbus. 3-8 plus five in a row will do that. The only thing worse than OSU fans' dangerous, irrational hatred is their resigned indifference. I long to be hated again. 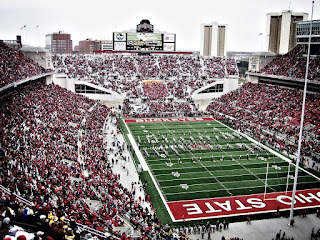 ABC had one good semi close up camera shot of your section just after the early interception.

The band really stood out wearing yellow hats. I heard they were given a round of applause for their half time performance. But like you said earlier - you can't boo America.

I remember people singing Iowa's fight song at dinner after the 2004 game.

I was at the game. I got the pleasure of sitting behind OSU band alums. They were very nice and showed my friends and me their version of Revelli Hall, which is...get this... in the Shoe. They fit a whole rehearsal space in there. One cool thing they had was a projector that was hooked up to a tele-tron or whatever the John Madden-write on the screen things are called. I guess they watch rehearsal footage on Saturday mornings before going to their outside practice and point out problems with that thing. Anyway, besides the band alums, everyone else taunted us in their usual OSU manner. The best taunt of the day? Old guy in a wheelchair with one leg asks me "How do you like being coached by a redneck?" This was apparently a comment about Rich Rod. I suspected that wheelchair man was a redneck himself. The second best? One guy was shouting “Motor City Bowl” at us. Third best, was the guy behind us who was trying to spell out Toledo, but couldn't spell it. “T-O-L-O-...oh um...T-E-O-T....how does it go?”