(Before we start, massive hat tip to the good people of the Bentley Historical Library for their invaluable work on behalf of Michigan athletics and fans and historians of the game.)

This is the 1973 Michigan Wolverines football team.  They went 10-0-1, tying Ohio State in the final game of the season (the infamous M Club Banner incident).  They were denied a trip to the Rose Bowl by a vote of the Big Ten athletic directors.  They finished the season ranked #6 in the country.  Led by All-Americans Dave Brown at safety and Dave Gallagher at right tackle, and Dennis Franklin at quarterback, they were, arguably one of Bo's finest teams.

But, look a little closer with me, won't you? 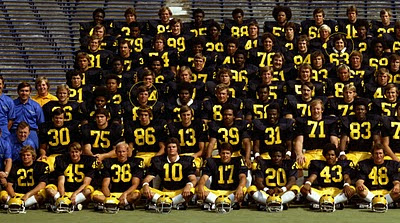 Email ThisBlogThis!Share to TwitterShare to FacebookShare to Pinterest
Labels: Back in '73, Dave Brandon, fun with the archives

Yes, and that's all fine and good. But seriously, right now, check out #53 (a bit behind Miles and to his right). That man was ROCKIN the neck beard 11 years before Lebron was even born. And his afro, well, there are no words. Look, even #88 is terrified just to be sitting next to all that facial and head hair.

In sum, I am impressed.

Oh trust me Reed, at some point, I want to have the epic hair showdown in Michigan team pictures. There is too much amazing happening in these to put into words.