An Ode to Maybe

I can't explain.  Illinois, a team that lost at home to Eastern Michigan this year and coached by a man whose beard looks like it comes out of mythology, was down 28-0 to Michigan, did not look like it could stop Michigan's rushing game on the edge, had a punt blocked which Michigan turned into a quick work touchdown, and generally looked, well, bad.  Oh sure, they got a touchdown late in the first half to at least make it interesting, but it looked like the only thing that was going to stop Michigan was stupid unsportsmanlike conduct penalties or fumbling.

So when Michigan looked bad in the third quarter, three and outs, lost fumbles, general malaise on defense, you could understand the building apoplexy in the Michigan fanbase.  But the math was telling a different story.  Ladies and gentlemen, the unhappy valley. 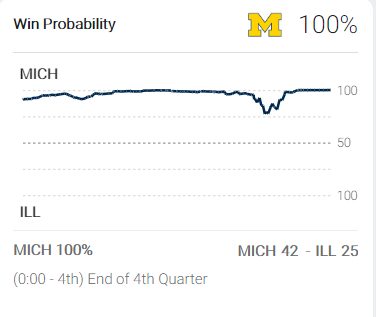 The lowest Michigan's win probability dropped to was 77.3% on the ensuing kickoff after the touchdown to make it 28-25 Michigan.  The moment Shea Patterson converted the 4th and 2 at the Illini 10-yard line, the win probability jumped back up into the 90th percentile and never looked back.  That the defense came out and immediately forced Matt Robinson to fumble, giving Michigan a short field, which they could not cash in on, only to then force Robinson into a sackfumbleception by Carlo Kemp on the Illini one-yard line, which Michigan did score on thanks to a plunge by Patterson and the score was something more like what Michigan might have expected.

The problem with pre-season expectations is that they put the best possible cast on every problem in the hopes that the concerns will be magically solved.  The weirdest part about college football is that, sometimes, they are.  Sometimes your new offensive coordinator works his magic and you look like an unstoppable machine [glances in a confused manner at Baton Rouge].  Other times, the legitimate concerns you have are well-founded and you keep trying to convince yourself that it's going to be OK.  The glimpses of Michigan doing things well in the first half today were almost enough to make you think maybe something was finally clicking.  Until, of course, it wasn't.  Even if Patterson did have an effective fourth quarter drive where he took care of business to get momentum back on Michigan's side, he still was only 11 of 22.  I know people were calling for McCaffery, but he just got out of the concussion protocol, I don't know how ready he was (yes, he made the trip.)  On a day when Nico Collins, Lavert Hill, and Kwity Paye did not see action, Michigan still ended up taking care of business, even if it wasn't how anyone wanted it to happen.

We've reached the halfway point of the journey and Michigan is 5-1.  The real tests begin in earnest next week with a White Out in Happy Valley.  I think the tempering of expectations has been such that Michigan fans are fully in "not in the face" territory, but strange things do happen in college football.  We'll just have to see what happens.
Posted by Craig Barker at 8:30 PM