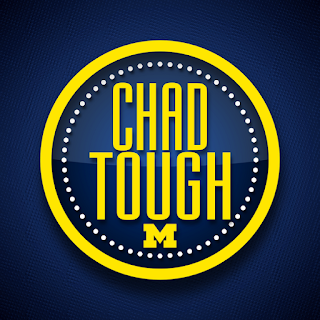 A year ago, following Michigan's 30-27 double-overtime loss to Ohio State, Jim Harbaugh was fined $10,000 by the Big Ten Conference for his post-game comments regarding the game's questionable officiating. Michigan football blogger Justin Potts from Maize & Go Blue decided to try and turn a negative into a positive by creating a fundraiser to match that $10,000 fine with donations to the ChadTough Foundation which raises awareness and money for DIPG research.Last week, November 23rd, marked the two year anniversary of Chad Carr's passing after a heroic battle with this dreadful disease for which there currently is no treatment.Justin, along with Brad Muckenthaler from Maize and Blue Nation, Kerri from SupportUofM and ourselves are proudly making this an annual event. Last year our goal was to raise $10,000. In just one week, we surpassed $28,000 in donations of which 100% went directly to the ChadTough Foundation. The loss to OSU a year ago was hard, but the fundraiser was very useful in helping me get over the loss and like Justin said, turn a negative into a positive.

Let's do it again!
Visit this link to the fundraiser.
And after you donate...SPREAD THE WORD!
Tomorrow is Giving Tuesday. Please make it a point to check out the ChadTough Foundation and the amazing work being done by them. DIPG is an absolutely horrible disease. However, in just a couple short years, new research has made some incredible discoveries and uncovered possibilities where none previously existed. It is not hyperbole to say that these discoveries may have not been realized without ChadTough!  We know there are a lot of worthy causes out there, we encourage you to follow your heart, but I know as a father of a six-year-old son who loves Michigan football with all of his heart, I cannot imagine anything harder than what the Carr family faced and their exceptional grace in turning this tragedy into hope for others.
Thank you and forever Go Blue!
Posted by Craig Barker at 5:24 PM

Email ThisBlogThis!Share to TwitterShare to FacebookShare to Pinterest
Labels: can call it annual now because it has happened twice, chadtough, doing it again, fundraisers
Location: Ann Arbor, MI, USA